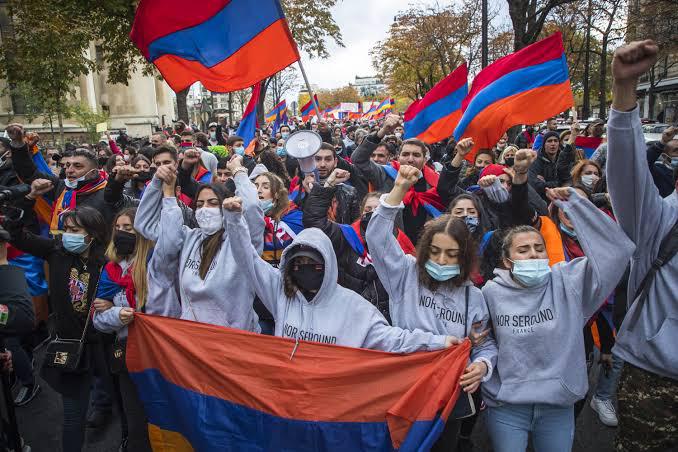 WILL ARMENIA WAKE UP TO THE NEW GEOPOLITICAL REALITY?

After the dissemination of the Soviet Union, the Caucasus became a region with several frozen conflicts: Nagorno-Karabagh, Abkhazia and South Ossetia being among them.

Abkhazia and South Ossetia are tiny republics that proclaimed independence, but this was not recognized by the international community except five countries: Russia, Venezuela, Nicaragua, Syria and Nauru, which is a Pacific Ocean State with 10,000 inhabitants.

Karabagh case differs from the others. Its status of a frozen conflict has now come to an end with the liberation of its territories from the Armenian occupation. If Russia remains committed to what it has achieved by brokering the ceasefire, the present legal status has every chance to be consolidated.

What is this legal status?

Karabagh, in early 1920s, was declared an autonomous region within the Azerbaijan Republic. No country in the international community, including Armenia, recognizes this status. However, there is a group of hard-core nationalist Armenians seeking full independence of Karabagh. You find such extremists in almost every society as nationalism is a sentiment that is difficult to resist. These activists fail to figure out the consequences of their acts. Diaspora Armenians who live a prosperous life in distant countries such as the US and France did not miss any opportunity to incite them to stir up unrest in the mainland Armenia and in Karabagh. Unfortunately, they still continue to do so. This policy caused considerable harm to Armenians, because at the end of the day, those who suffered the consequences were the people who lived in Karabagh.

Regarding the historical background of the conflict, we cannot of course go to pre-history to find out who were the original settlers of Karabagh. There are contradicting figures about the ethnic composition of its earlier population. Ottoman figures of the eighteenth century differ from the figures compiled at that time by the Armenian Church.

For the sake of impartiality, we may take the Russian figures. Russian authorities took a census after Trans-Caucasus was transferred to Russia according to the Turkmenchay Treaty signed with Iran in 1828. This census, which was taken in 1832, shows that 13,965 Muslim families lived in Karabagh as opposed to 1,491 Armenian families. In other words, the Armenian population was about one tenth of the Azerbaijani population at that date. This proportion has steadily changed in favour of Armenians throughout decades. In fact, 160 years later, in 1989, the official figures about the ethnic breakdown of Karabagh population shows that Armenians reached 76 percent of Karabagh’s population. So any reasonable solution of the Karabagh conflict has to be based on these more recent figures. Of course, Azerbaijanis who had to leave their homes after 1990s have to be considered as full-fledged part of the Karabagh population.

By seizing several provinces of Azerbaijan in 1994 and launching in September last year another unprovoked military operation on Azerbaijan, Armenia has actually contributed to prepare the ground for a lasting solution of the Karabagh conflict. A new era has been ushered in with the liberation of the occupied lands. Now that a ceasefire has been agreed, neither the Azerbaijanis nor the Armenians should become hostage of the past. The indigenous people of Karabagh have to look forward and create an environment that will care for the rights and welfare of every individual, whether he is Azerbaijani or Armenian. Now may be time for Armenia to ponder on what was wrong in the policy that it followed so far. This may be the beginning of a new era in and around Armenia.

The terms of the November 10 ceasefire in Karabagh include an article to build a road (or railway) that will link the Nakhchivan exclave to Azerbaijan proper. When this project will be materialized, it will automatically open a border gate between Turkey and Armenia, as the road has to cross the Armenian territory. Such a step will definitely bring Turks, Azerbaijanis and Armenians closer to each other, with a possible thaw in the relations.

In early 1990s, when the Armenian army seized Karabagh and seven provinces of Azerbaijan, Azerbaijanis did not have means to defend themselves against the aggressor. The Minsk Group established by the Organisation for Security and Cooperation in Europe (OSCE) to put an end to the occupation did everything to keep the Karabagh conflict unresolved. However, in the 30 years that elapsed in the meantime, Azerbaijan became aware of the importance of a strong army, with well-trained officers and soldiers. It sent students to cadets’ school and staff colleges in Turkey and elsewhere.

Azerbaijan’s defence budget is almost equal to the entire national budget of Armenia. As an oil rich country, it can afford to buy state-of-the-art defence equipment from several countries including US, Russia and India. It purchased manned and unmanned drones from Turkey. Azerbaijan has a population three times bigger than Armenia. The outcome of recent military clashes created a new geopolitical reality in Karabagh and Azerbaijan. No doubt Armenia is aware of it. Therefore, one can only wish that it would not be tempted to get involved in new adventures.

Mr Yashar Yakish, Turkish diplomat and politician.
Served as Ambassador of Turkey in Riyadh, Cairo. One of the founders of the Justice and Development Party. Minister of Foreign Affairs in 2002-2003 and Chairman of EU Committee in Turkish Parliament between 2003-2011.