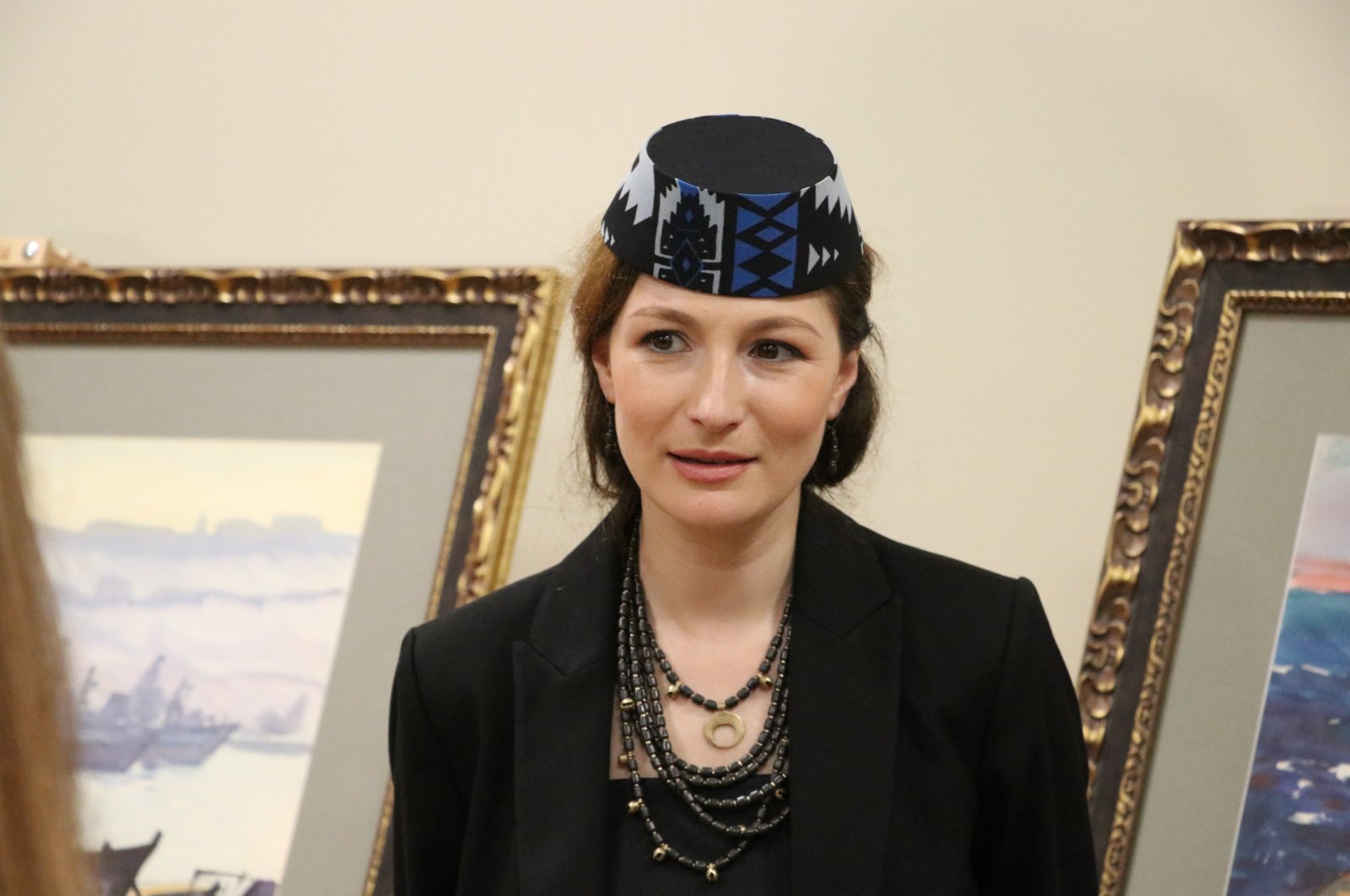 Emine Dzhaparova, the first deputy minister for foreign affairs of Ukraine, speaks at an exhibition on Crimean Tatar deportation, May 17, 2021. (AA Photo)

Witnesses of the Crimean Tatar exile recalled the deportation that took place 77 years ago at the hands of the Soviet administration when they were separated from their homeland amid conditions that made them fear for their lives.

Neset Zekeriyayev, 83, shared his account of the deportation with Anadolu Agency (AA), explaining how soldiers arrived at the Argancik village of Karasu Pazar in Crimea in the morning and began loading residents onto trains.

He said his family, consisting of his parents and six children, left Crimea nearly eight decades ago.

“There was no water or food on the way. We tried to get water from the surrounding areas, we ate what we found in the fields, such as corn,” he said.

Zekeriyayev recalled that he kept asking his mother about his sister Zehra but did not get a response.

“Later, my mother said that Zehra died on the way.”

Noting that they were deported to the Fergana region in Uzbekistan, Zekeriyayev said his father died in 1946, and his mother was not able to take care of him and handed him to a childless Uzbek man.

“I worked with him but then I got sick, there was dysentery then, many people were dying. The Uzbek man was afraid that I would die too, and he gave me back to my mother,” he said.

Due to financial difficulties, his mother was forced to leave him at the welfare center for a while.

Zekeriyayev said later they were not allowed to reenter Crimea and he moved to what is now known as Kherson in southern Ukraine in the 1980s.

Abdurrahman Halilov, 85, said three soldiers came to the village of Karabay in Crimea at around 4 a.m. and took his family from their home when he was only 8 years old.

“The eldest of our siblings was 14 years old. We were four boys and a girl. They (soldiers) didn’t let us take anything from home. They didn’t even let my mother take money with her. I wanted to take my bag, but they wouldn’t let me either. Then they gathered everyone and the soldiers loaded us into the wagons,” he said.

Halilov said they were deported to the Ural region by trains.

“They (soldiers) said to the people there that the cannibals are coming, be careful. When we got off the trains and when the local people saw us they said ‘you are people like us,’ and we got to know each other,” he said.

He explained that later they were sent to villages in the region where they didn’t even have enough to eat.

Halilov said he moved from the Urals to the Andijan region in Uzbekistan in 1954.

“There was not much freedom in Uzbekistan. We could not gather in groups of more than three people, the soldiers would beat us. There was a curfew then,” he said.

He emphasized that they tried to return to Crimea from Uzbekistan but were not allowed to do so.

“In 1967, I went to the Ivanovsky region in Ukraine to be with my sister. We were looking for a place to live. We were not allowed to go to Crimea, so we bought land in Henichesk city (in Kherson Oblast of southern Ukraine).”

During World War II, Soviet Russia had to leave Crimea to the Germans.

Crimean Tatar Turks successfully fought against Nazi Germany by joining the Soviet ranks. Despite this, Russian commanders accused Crimean Tatars of “cooperating with the Germans.”

After the Russian Red Army recaptured Crimea from Adolf Hitler’s Germany, Crimean Tatar Turks began to come under pressure from the Russians.

Reports were prepared for the Soviet administration against the Crimean Tatars and demanded the complete expulsion of Crimean Tatars from their homelands.

Nearly 250,000 Crimean Tatar Turks were exiled to Central Asia in three days in wagons in which animals were transported.

Nearly half of those who were exiled lost their lives on roads due to illness, hunger and difficult conditions.

After Crimean Tatars were expelled from the peninsula, systematic efforts were made to erase traces of Turkish culture and other communities.

With the decision of the Soviet Union at the end of 1944, all names of places that were in Turkish were changed to Russian.

This article originally appeared in DAILY SABAH on 19 May 2021.