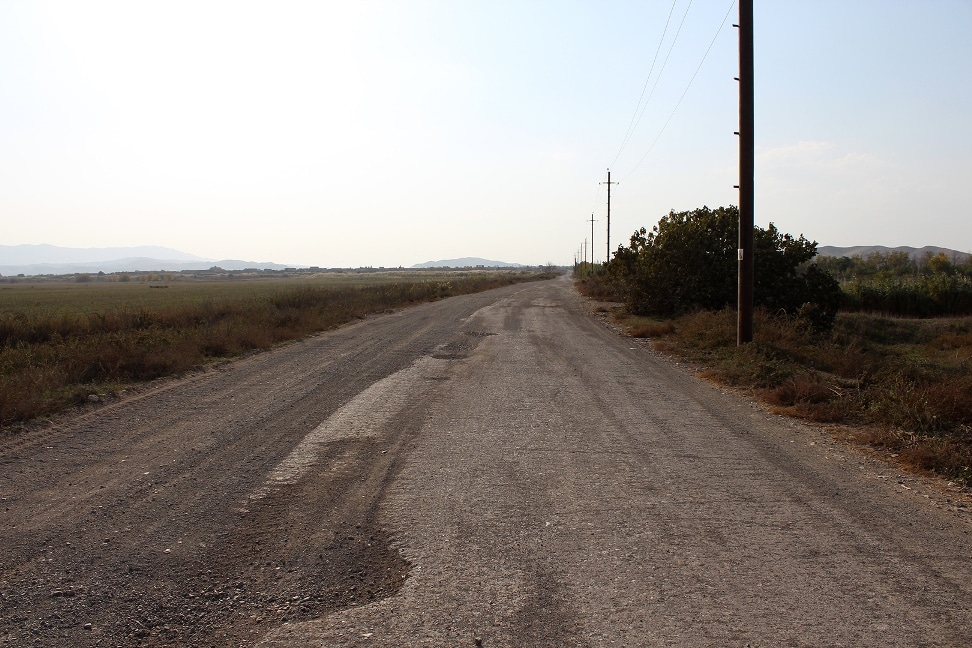 The sign, installed in front of the Horadiz bus station in Fuzuli, shows the distance to Zangilan – 86 km. At first glance, it is not so far, but to overcome this distance is not easy. The road is not in favorable state for passenger transport from the liberated village of Shukurbeyli of the Jabrayil region onwards.

Regarding the road conditions, we have told in our previous report about the trip to Jabrayil and Gubadly. After the visit to these regions, we witnessed two changes: asphalt was laid till the village of Shukurbayli, and white lantern poles were installed on the roadsides as we drove into Jabrayil.

After passing the liberated village of Niyazgullar in Jabrayil, we reach two crossroads. The road on the left goes to Zangilan. The car is climbing on a rocky road, moving through the hills. We are on the asphalt road. The road is, as expected, old and neglected. It is clear that these roads have not been repaired during their 28 years of occupation. Trenches dug by the Armenian army along the roads still remain. We are moving along the banks of the Araz River. On that side is already Iran. For 28 years, the Azerbaijani state was not able to control them. We don’t know what this border witnessed during the years of occupation. The Hakari River, which passes through Lachin and Gubadly, also joins the Bargushad River and flows into the Araz river in Zangilan region. 28 years ago the coast of Araz was different…

Aybaniz Ismayilova, the head of the International Relations Department of the Azerbaijani Community of Nagorno-Karabakh, originally from Minjivan, narrates those days to the Press Club:

“At that time, the people of Zangilan, who were under siege as a result of the occupation of the neighboring regions of Gubadly and Jabrayil, saw the way out by crossing the Araz River into Iran. Otherwise, a second Khojaly tragedy would be inevitable. About 33,000 people gathered on the Iranian border, on the banks of the Araz River. It was impossible to cross the high water level. The Azerbaijani leadership held talks with the Iranian government and the Iranian side closed the dam on the Araz River. Only then did the people cross the river and escape. My grandmothers, uncles and other relatives also crossed the Araz River that day. To this day, my family often remember those terrible moments, the picture of human suffering on the shores of Araz, scenes full of horror, fear and hope on the outskirts of Araz – bonfires lit to prevent people from freezing, blankets spread on wet ground, migration with people, cattle and cars, loads, belongings, memories..”

We are moving towards Minjivan settlement of Zangilan. It is surrounded by dense forests and mountains. Unlike Jabrayil and Gubadly, the destroyed houses are not lost on gray soil, but among evergreen trees and fallen yellow leaves. Houses destroyed 28 years ago are also found here. We are witnessing some construction cases. Between several ruined houses, there are houses built later, with a “Krosna” antenna on top. The condition of several bridges leading to the settlement is the same as 28 years ago – neglected and unrepaired. Farms have been established and lands have been cultivated in these sparsely populated areas. There are only a few public catering facilities in the settlement. Special attention is paid to the road signs installed here by the Armenians – they point the way to the big cities of Armenia and the occupied settlements of Azerbaijan. But all the rest in the ruins…

28 years ago in the village of Minjivan, located 12 km south-west of the district center, there was an automatic telephone exchange with 400 numbers, as well as 3 secondary schools, 3 kindergartens, a library, a hospital, a pharmacy, a club, about 30 offices and enterprises, 26 shops and catering facilities. An important highway and railway line passed through the settlement. Minjivan was an urban settlement. The people of Minjivan were called “station children”. So, every family had at least one railwayman.

Another significance of Minjivan is that it is located at the border. As a result of a counter-offensive operation conducted by the Azerbaijani Armed Forces on September 27, a 132-kilometer section of the Azerbaijani-Iranian state border was completely liberated from the occupation. The Azerbaijani flag was hoisted at the Mammadbeyli, Sharifan, Muganli, Tin and Minjivan border posts in the liberated Zangilan region.

… We return back. A dark night, a ruined road, an old bridge. But the land has already been liberated, the border has been restored, so life will soon return to Minjivan.

This article originally appeared in Press Klub on 11 Nov 2020.