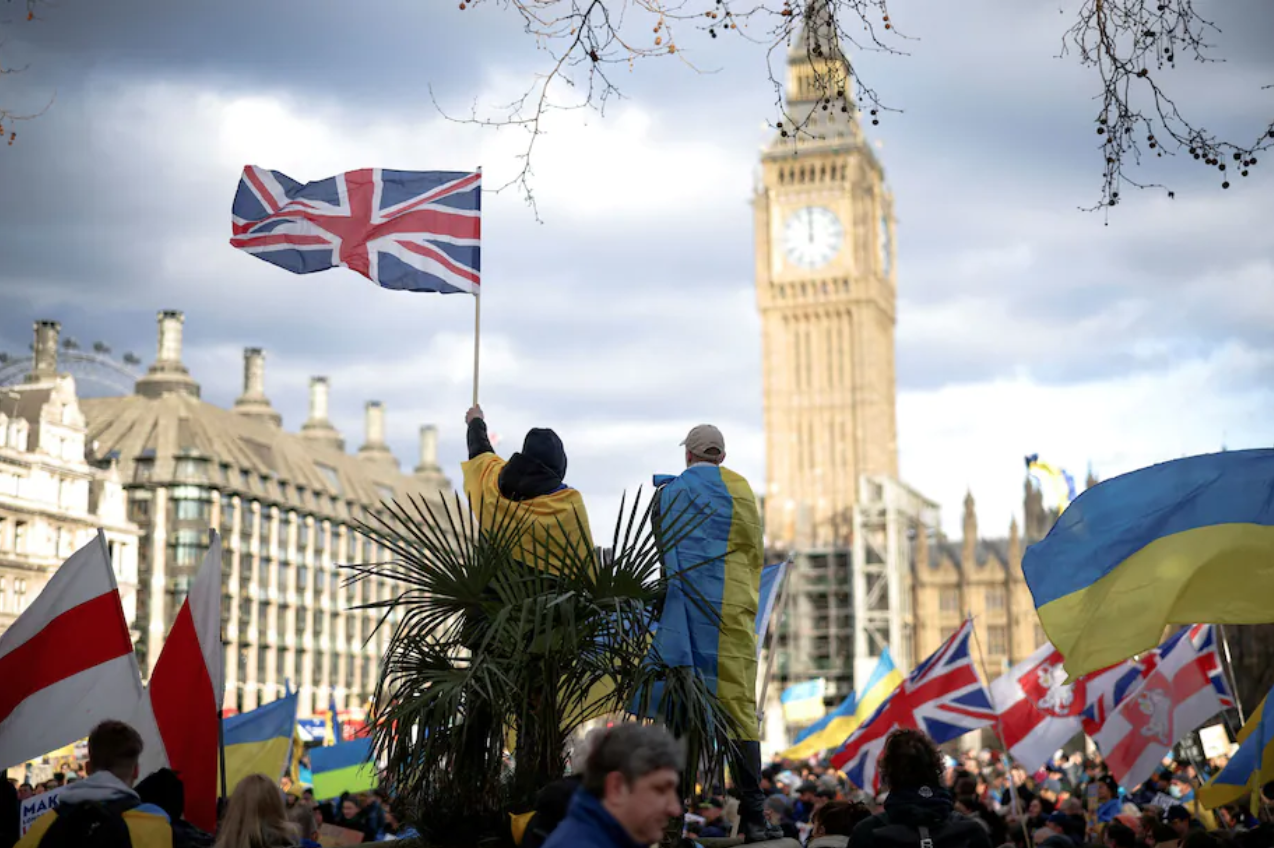 Ukrainian President Volodymyr Zelensky addressed the British Parliament on Tuesday via video, receiving a standing ovation, according to Azerbaijan in Focus, reporting The Washington Post. He recounted events from each of the last 13 days since Russia invaded and repeated calls for tougher sanctioning of Russia and for a no-fly zone over Ukraine.

“We will continue fighting for our land, whatever the cost,” Zelensky said. “We will fight in the forests, on the shores, in the streets.”

The refrain echoed a line from a stirring speech by British Prime Minister Winston Churchill during World War II.

“The question for us now is to be or not to be,” Zelensky said, evoking Shakespeare. “I can give you a definitive answer: It’s definitely to be.”

After Zelensky’s speech, British Prime Minister Boris Johnson reiterated that British humanitarian aid, military support, and sanctions against Russia would continue “until Ukraine is free.” He did not address Zelensky’s repeated calls for a NATO-administered no-fly zone, which Western countries have rejected as a step that could escalate into a larger confrontation with Russia.

In previous speeches to Western leaders, Zelensky has struck a similarly emotional and defiant tone. When he spoke to members of the U.S. Congress last week over Zoom, he told the politicians that it might be the last time they saw him alive.

“It’s been 13 days we’ve been hearing promises, 13 days we’ve been told we’ll be helped in the air, that there will be planes, that they will be delivered to us,” Zelensky said Tuesday in a video posted on Telegram. He suggested that “those who have not secured the Ukrainian skies from the Russian assassins” bear some responsibility for the resulting carnage.

When a Ukrainian activist pleaded with Johnson on March 1 to support a no-fly zone, the British leader said: “Unfortunately the implication of that is that the U.K. would be engaged in shooting down Russian planes, engaged in direct combat with Russia. That’s not something we can do.”

As of Tuesday, the United Nations said that some 2 million civilians had fled Ukraine and that 474 have been confirmed killed and 861 injured, although it said the actual casualty toll is undoubtedly “much higher.”

The video of Zelensky, wearing an olive-green military T-shirt, was projected onto big screens set up in Parliament for British lawmakers, who wore headsets to hear an interpreter.

Lindsay Hoyle, the speaker of the House of Commons, said before the speech that it would be “historic” and that “every parliamentarian wants to hear directly from the president, who will be speaking to us live from Ukraine, so this is an important opportunity for the House.”

Zelensky addressed U.S. lawmakers on Saturday and made a direct appeal for additional military aid, including by helping him secure more Soviet-era fighter jets to counter Russian air raids.

During the call over Zoom attended by more than 280 members of the Senate and House, Zelensky described “the urgent need” for more military support and humanitarian aid, as well as for a worldwide ban on the purchase of Russian oil, according to statements and people on the call who spoke on the condition of anonymity because the meeting was private.

In a speech this month to the European Parliament, Zelensky described how Kharkiv, Ukraine’s second-largest city, was being pummeled. The English-language interpreter for the president briefly choked up during the remarks.

Last week, Zelensky thanked Britain’s Prince William and his wife, Catherine, Duchess of Cambridge, for “courageously opposing Russia’s invasion” after the couple made a rare foray into politics by tweeting that they “stand with the President and all of Ukraine’s people as they bravely fight.”

British Defense Secretary Ben Wallace said Tuesday that Russia’s invasion of Ukraine is not going as planned and that Russia’s military is taking heavy casualties.

“Probably the biggest single casualty so far are Russian military soldiers,” he added, “who have been let down by appalling leadership and appalling plans.”

Wallace also said a 40-mile convoy of Russian military vehicles headed from the north on a route toward Kyiv is “still stuck” outside Ukraine’s capital. American officials attribute the apparent stall in part to logistical failures on the Russian side. They have also credited Ukrainian efforts to attack parts of the convoy with contributing to its slowdown. But they warn that the Russians could regroup at any moment and press forward.

“We can see that the Russians are having real logistic problems, so that affects morale; they’re not getting through, they’re getting more desperate,” Wallace added. “Russia has built itself a trap.”

Wallace also said that Britain is “increasing our support of both lethal and nonlethal aid to Ukraine,” and that it would offer military support to neighboring Poland, a fellow NATO member if London decided to provide Ukraine with fighter jets.

“I would support the Poles and whatever choice they make,” Wallace said, but he noted that Britain could not offer aircraft that the Ukrainians would be able to use. “Poland will understand that the choices they make will not only directly help Ukraine, which is a good thing, but also may bring them into the direct line of fire from countries such as Russia or Belarus.”

Johnson’s government has faced criticism for approving only 300 visas for Ukrainian refugees, as other European leaders agree to temporarily waive restrictions to allow easier entry.