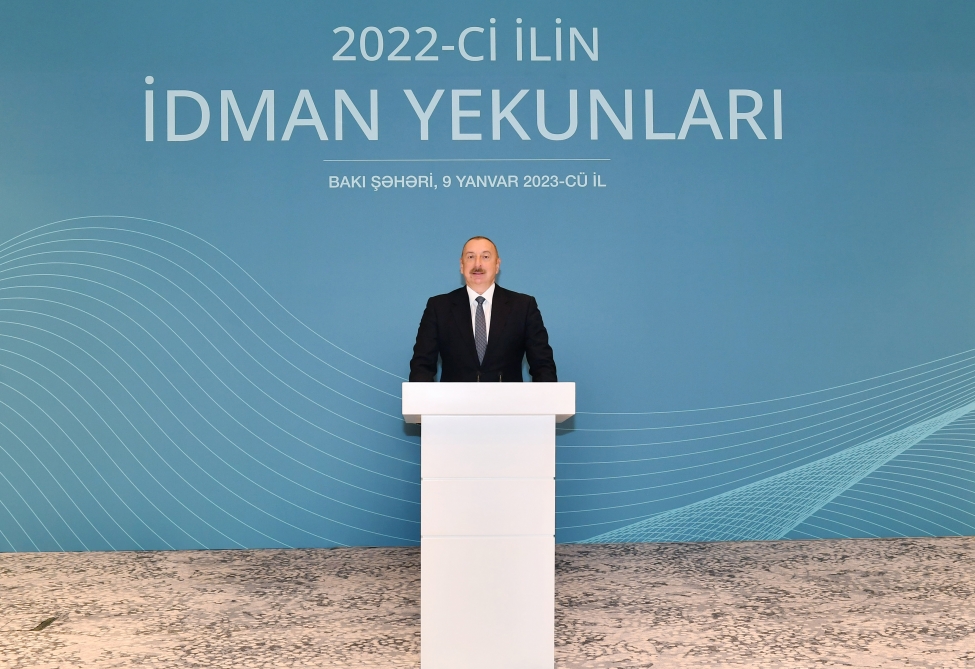 President of the Republic of Azerbaijan, President of the National Olympic Committee Ilham Aliyev has attended a ceremony dedicated to the sporting results of 2022, according to Azerbaijan in Focus, reporting AzerTac.

The head of state made a speech at the ceremony.

– Dear friends, we will discuss the sports results of the year today. Like every year, last year was also successful for Azerbaijani sport. As a whole, the work done on a national scale deserve a high assessment. Because all the tasks we set before ourselves at the beginning of last year have been fulfilled and the dynamic development of Azerbaijan has been secured. Since sport is also a part of our life, it has certainly developed within the framework of the overall trend. This is evidenced by the victories of our athletes. At the same time, the various international competitions held in our country confirm again that Azerbaijan is a sports country. As a whole, the policy carried out in recent years is producing good results today.

Athletes have won more than 800 medals in international competitions, and about 300 of them are gold. It is indeed a great achievement. Competition in the world of sports is increasing and new sports countries are emerging. Therefore, it is no easy task to demonstrate such high results every year and confirm one’s strength.

Our athletes have represented our country in world and European championships with dignity. Of the international competitions, I would like to specifically mention the Fifth Islamic Solidarity Games. As you know, Azerbaijan finished first in the teams competition at the Islamic Solidarity Games held in Baku five years ago. This was a historic victory. This time in Konya, Turkiye, our athletes were in fourth place among 56 countries, winning a total of 99 medals. This once again confirms the successes Azerbaijan has achieved in the field of sports. Because the competition in the Islamic Solidarity Games was very tough. Almost all teams fielded their top athletes. Winning the fourth place in such a close struggle is certainly a great victory, our great achievement.

We were watching the Games and, unfortunately, we have to note that the injustice of referees deprived us of several medals. Nevertheless, this great achievement – I consider it a victory – once again confirms the strength of Azerbaijani sport and further shows that the development of sport in Azerbaijan is consistent. Many of our athletes who participated in the Baku Games five years ago did not participate in the Islamic Solidarity Games in Konya. Generations change, but our success remains constant, and this draws our attention to one important issue. In other words, here too we are seeing growth and success. As generations replace each other, the experience of our outstanding athletes seems to be handed over to younger athletes. Young athletes growing up in Azerbaijan will keep our sporting fame high, and this should be a constant process.

Of course, the training of young athletes should be done in an organized manner. In this field, we have been observing more focused work recently, especially in terms of selection. Numerous events held in the regions will create greater opportunities for both selection work and for the attraction of young people, children and teenagers to sport clubs.

There have been various competitions across the country over the past few years, and I really appreciate that. One of the tasks set before the Minister of Youth and Sports was to revive sports in the regions and hold many competitions. This policy will contribute to our sporting successes. At the same time, young people, teenagers and children will be involved in sports from a young age, which is of great importance for their upbringing. Sport is also about physical strength, and every person who feels physically fit is usually mentally healthy as well. The success and example of our outstanding athletes should be an example for all young athletes. Because our athletes conduct themselves with dignity in life, in society, in everyday life. They underpin their achievements in sports with their everyday actions. Thus, young people and children have an even greater desire to do sport and emulate our outstanding athletes. Of course, state support for sport is also of special importance. We have seen it in the example of Azerbaijan that where there is attention to sports and athletes, where there is care, where there is respect, there will be good results, of course.

The good news is that there are all the opportunities to do sports today. About 50 Olympic Sports Centers have been opened in the regions, and this process is ongoing. At the same time, we have hosted the most prestigious sporting competitions in Baku, and we will host even more. World and European championships will be held in our country, qualification tournaments of the Olympic Games have been held here before, and this is not ruled out in the future either. We are in the final stage of preparations for the Summer Olympic Games. 2023 will be a decisive year in terms of many parameters. Therefore, our entire sports community, the ministry, the National Olympic Committee, federations, clubs, sports associations should, of course, see this as the top priority so that Azerbaijan confirms its strength in the Summer Olympic Games.

As for the popularity of sports, I think that promotion work in the regions should become more extensive. We have recently created conditions for practicing outdoor sports in several parks in Baku. We have installed exercise machines. I believe that we should take this experience to all our regions and apply it there. The Ministry, local executive authorities should seriously deal with this issue. After all, not everyone may have time and financial opportunities to go to the gym. Therefore, considering that the weather conditions in most of Azerbaijan are positive throughout the year, this will have a great impact in the open air, both for people’s health and for the development of sport as a whole. Therefore, I think that there is a great need for that.

I should also note that there are plans to create sport facilities in each of the liberated cities. Master plans of all cities have been approved. All restoration and construction work will be carried out on the basis of Master Plans, and the creation of sports facilities is a part of them. I must inform you that a new project of the famous “Imarat” stadium of Aghdam is being developed. The stadium will be rebuilt and, at the same time, a large Olympic Sports Center will be created next to it. At the same time, the foundation of the Karabakh Equestrian Complex was laid in Eyvazkhanbayli village of Aghdam last year. We created the Karabakh Equestrian Complex in Aghjabadi district during the occupation, also in the land of Karabakh. However, the decision was made to create a beautiful and modern equestrian complex in the village of Eyvazkhanbayli. The work has already been started.

We have plans to create sports facilities in all other liberated cities. Of course, first of all, we must return the former IDPs to their ancestral lands, and work in this direction is underway. First of all, schools, hospitals and other infrastructure facilities should be created. However, sports facilities aren’t and won’t be forgotten, of course.

Noting all this, I want to say again that Azerbaijan has asserted itself in the world as a strong sports nation, and the position of our country in the world arena as a whole is getting stronger every year. We are conducting our policy in a consistent manner. There are stability, peace and security in Azerbaijan, and large-scale construction work is being carried out. Our historic Victory is a source of pride for every Azerbaijani, for every citizen, for all Azerbaijanis of the world. We will educate the next generation in the spirit of patriotism, as we have always done, and we have raised such a wonderful young generation that raises the flag of our country both in sport arenas and on the battlefield. The absolute majority of those who took part in the second Karabakh war were young people – young people who grew up on the basis of our policy and received good education both in society and in their families. This factor, of course, manifests itself in all areas. So our nation has been living as a victorious nation for more than two years now, and this remarkable factor will remain with us forever. Simply put, each of us should live up to this holy Victory in our own field, in our own field of activity. I am sure that when our athletes participate in international competitions, they perform with a completely different enthusiasm, even with different valor, and once again confirm that we are a victorious nation.

I want to once again congratulate the athletes, their coaches and the sports community on all the achievements made. Usually, our meetings on sporting results took place at the end of the year, but last year we had a lot of events at the end of the year, so it was not possible. But I thought that we should restore this tradition. In the era of COVID, there was no such possibility. However, traditions are an integral part of the outlook of the Azerbaijani people. Therefore, we have restored this tradition.

I wish you new successes and new victories! The state of Azerbaijan will always be with you. All our people are proud of about your successes. All your successes are and will be highly appreciated.

Once again, I wish you new victories and new successes. Thank you!

The event then featured the awarding of athletes and sports specialists who contributed to the development of sports in Azerbaijan.

President Ilham Aliyev presented certificates of new apartments to a group of athletes and sports specialists who achieved high results in 2022.