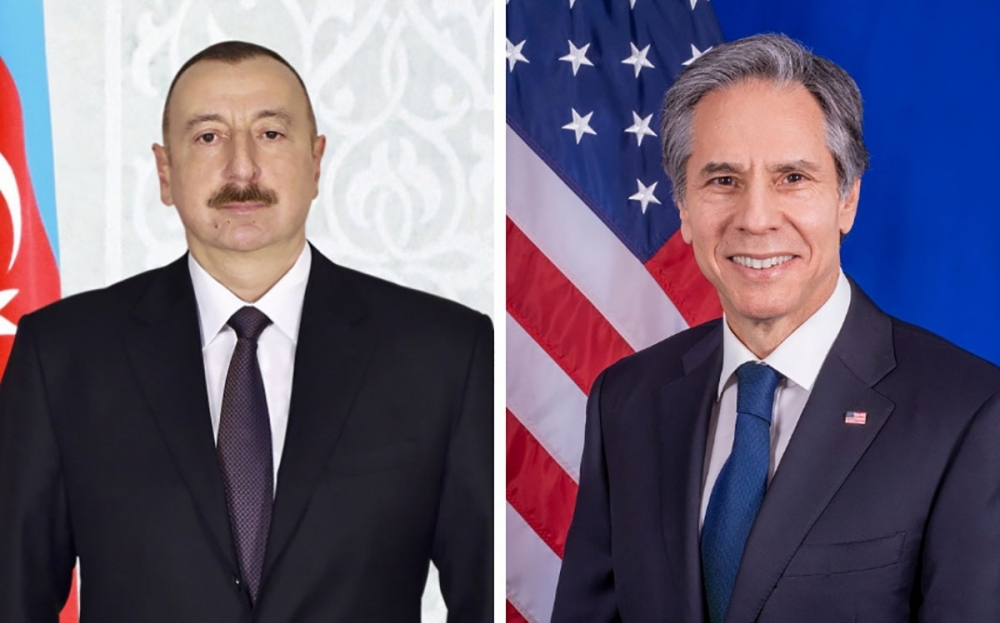 On 10 October, US Secretary of State Antony Blinken made a phone call to the President of the Republic of Azerbaijan Ilham Aliyev, according to Azerbaijan in Focus, reporting AzerTac.

During the telephone conversation, US Secretary of State Antony Blinken described the recent meetings as positive steps towards a lasting peace agreement. He emphasized in this regard the importance of the meetings held at the level of foreign ministers in Geneva and at the level of leaders in Prague. The Secretary of State also noted the importance of the meeting held between representatives of Azerbaijan and Armenia at the initiative of the US President’s National Security Adviser Jake Sullivan at the White House. Evaluating the return of 17 Armenian prisoners by Azerbaijan as a positive step, Antony Blinken said the United States was ready to provide support in the delimitation of borders, the opening of transport lines, the determination of the fate of missing persons, as well as addressing other humanitarian issues.

The Secretary of State also touched upon the importance of conducting negotiations on a peace agreement within a specific timeframe and praised the discussions on ensuring the rights and safety of ethnic Armenian residents living in Karabakh. Antony Blinken noted the discovery of a mass grave in Azerbaijan and expressed his condolences to the head of state.

For his part, President Ilham Aliyev positively assessed the first bilateral meeting between the foreign ministers of Azerbaijan and Armenia in Geneva. The head of state also expressed hope that the statement adopted as a result of the meeting in Prague would contribute to the peace process. President Ilham Aliyev expressed his confidence that if Armenia showed political resolve, a peace agreement could be signed before the end of this year.

The head of state also touched upon the meetings held between representatives of Azerbaijan and Armenia at the initiative of both Antony Blinken and Jake Sullivan, evaluating them as steps towards peace. The President of Azerbaijan reminded that more than 3,900 of Azerbaijani compatriots were considered missing after the first Karabakh war and noted the importance of Armenia sharing information on the location of mass graves. President Ilham Aliyev asked the US Secretary of State to use his capabilities to help resolve this issue. The head of state said that the International Committee of the Red Cross had certain information about the locations of some mass graves based on witness statements and other information.

During the phone conversation, the sides also discussed the future development of Azerbaijan-US relations.