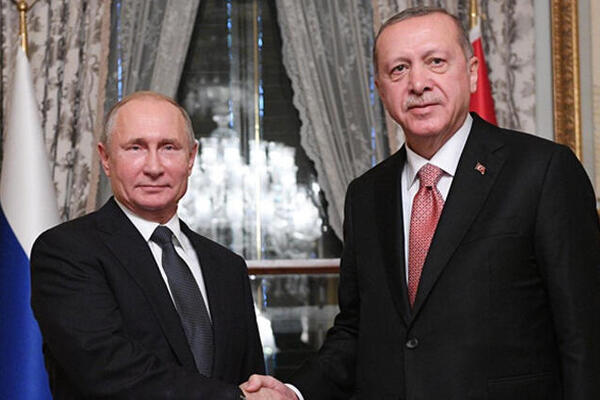 Turkey and Russia will carry out a comprehensive review of their bilateral relationship and regional cooperation in the Syrian, Libyan and Nagorno-Karabakh theaters and will plan 2021-2022 diplomatic consultations, including the next Turkish-Russian high-level cooperation council at the presidential level.

Foreign Minister Mevlüt Çavuşoğlu will pay a visit to Sochi on Dec. 29, where he will hold talks with his Russian counterpart, Sergey Lavrov, on the occasion of the 8th Meeting of the Joint Strategic Planning Group between Turkey and Russian Federation.

“We will evaluate all the dimensions of our bilateral relations. We have cooperation with Russia although we have differences in the regional issues,” Çavuşoğlu told reporters at a press conference with visiting Kosovar Foreign Minister Meliza Haradinaj-Stublla in Ankara.

“We are on different camps in Syria, but our cooperation under the Astana Process continues through the Constitutional Committee meetings. At the same time, we are working to maintain peace in the field,” he stated.

The minister also informed that recent developments in Nagorno-Karabakh and Libya would also be on the agenda during the talks with Lavrov in Sochi.

“At the Joint Strategic Planning Group Meeting, which is to be co-chaired by the Ministers of Foreign Affairs, the two sides will have a comprehensive exchange of views on bilateral relations as well as current regional and international developments,” read a statement issued by the Turkish Foreign Ministry on Dec. 28.

The plan for Consultations to be held in 2021-2022 between the foreign ministries of Turkey and Russia will be signed at the end of the talks, according to the Turkish Foreign Ministry.

In a statement last week, Russian Foreign Ministry spokeswoman Maria Zakharova informed that “The focus will be on establishing the joint Russian-Turkish center for monitoring the ceasefire and all military operations in the Nagorno-Karabakh conflict zone.”

The meeting between Çavuşoğlu and Lavrov comes as the two countries are finalizing joint efforts to establish a joint center for monitoring and inspecting the implementation of the Azerbaijan-Armenia agreement. Turkey has dispatched the first batch of its troops to be stationed at the center in Aghdam province of Azerbaijan.

The two foreign ministers will review the recent developments in Syria, particularly in the Idlib province where Turkish and Russian troops are carrying out a joint patrolling mission along the strategic M4 highway.

The meeting will also help the two ministers to prepare for the next Turkish-Russian High-Level Cooperation Council that convenes regularly under the leadership of President Recep Tayyip Erdoğan and Russian President Vladimir Putin.

Erdoğan: Putin a man of word

In the meantime, an exchange of courtesy statements between the two leaders has continued.

In answer to a question about Putin’s remarks during his annual news conference that Erdoğan is a leader who “keeps his word like a real man,” President Erdoğan said that those very same remarks also describe the Russian leader himself.

“I have known Mr. Putin to be a man exactly like that since I first met him,” Erdoğan said. “He is really a man of his word, a man honoring his promises. Given our bilateral ties, there are indeed few countries with which we enjoy such robust relations. I hope our relations, which we have maintained so far, will continue as they are in the future as well. I see this in every issue, be it political, military, diplomatic, cultural or economic. Also, in terms of our bilateral trade volume, we are walking towards our goals with determination and I believe we will continue to do so.”

Dimitry Peskov, the spokesperson of Putin also elaborated the ties between the two leaders in a televised interview over the weekend. “The constructive stances of the two leaders pave the way for a coherent resolution of the controversial issues despite disagreements and conflict of interests [between Turkey and Russia],” he said.

He described Russia and Turkey as two big countries in the region with the potential of contributing to security and stability. “Two countries, at least, can do everything to avoid war.”

This article originally appeared in Hurriyet Daily News on 28 Dec 2020.